Oliver is eight years old. He is the fourth child in a family of five children, and was the only child to be born with a cleft lip. Oliver’s father supports the family working as a security guard in Quezon City.

A friend of the family who is a doctor heard that Operation Restore Hope was in Caloocan and told his parents to take him along to the Hospital. Oliver and his mother and father came in to the Hospital on our third day of our surgery, hoping they weren’t too late to be scheduled. Oliver was operated on the very next day.

With a big smile before he went into the operating theatre, Oliver told us that when he grows up he wants to be a doctor. 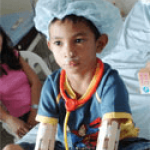